Reviewing DXA Scans on the Web with BoneStation

BoneStation is a web-based reporting solution which increases the productivity of bone density testing providers, including technologists, physicians, and administrators. In this article we focus on physicians who are responsible for the review and interpretation of BMD and VFA scans.  The physician will essentially do the following: select the exam to review, assess the technical quality of each scan, and  generate the report by filling in the various components (Assessment, Recommendations, Fracture Risk, etc). We describe that process in further details below.

The physician starts by looking at The Review List, a list of recently performed BMD scans which need to be read.

In this case the system shows 29 exams ready to be reviewed. Notice the drop down menus at the top.  These are particularly useful in situations where there are multiple DXA machines and multiple reviewers.  The Exam Date filters the list to show scans performed on a particular day.  The Location filters the list based on the DXA machine’s geographic location.  The list can also be sorted by Patient, Exam Date, and Referring Physician. In this Review Step 1, the physician  initiates the review process by clicking on Create Report (left button).

Review Step 2 appears as “Select Comparison Scans”. During this step the current PA spine scan and all historical PA spine scans are displayed in summary fashion.  Prior scans that the physician does not want included can be excluded from the report by clicking the Exclude checkbox.

On Review Step 2 prior scans may be excluded. (click for full size)

The screen shows a summary of each prior scan, including scan date, scan mode, serial number of DXA machine, analysis date, and relevant BMD data.  If a prior scan was performed on a different DXA or using a different scan mode, the corresponding data would be highlighted in red.  This alerts the reviewer to the fact that he may want to exclude the scan.  For example:

Scan mode differs and is highlighted.

Looking back at Review Step 2, notice that “OK” appears in the Tech Quality column for the 11/10/2011 scan.  The 2011 scan has a report that was created in BoneStation and its technical quality was evaluated to be OK at the time of review.  Clicking OK pops up that report for immediate viewing.

Click the Continue button to move to the next step.  On Review Step 3 one can compare the images of the current scan and the baseline.  Additional images, with scan data, may be viewed by clicking the dates in the Other Historical Scans section.

On Review Step 3 the reviewer indicates the technical quality of the scan as either OK, marginal, or uninterpretable.  When one of the latter two is selected, one or more reasons must be picked in the second column.  If a scan is designated as uninterpretable, it will not be used in the final assessment. It is also during this step that a reviewer may request for a scan to be reanalyzed.  In this case the physician reviewer is prompted to send instructions to the technologist via email.  The scans are retained in BoneStation in a separate “Awaiting Reanalysis” queue. 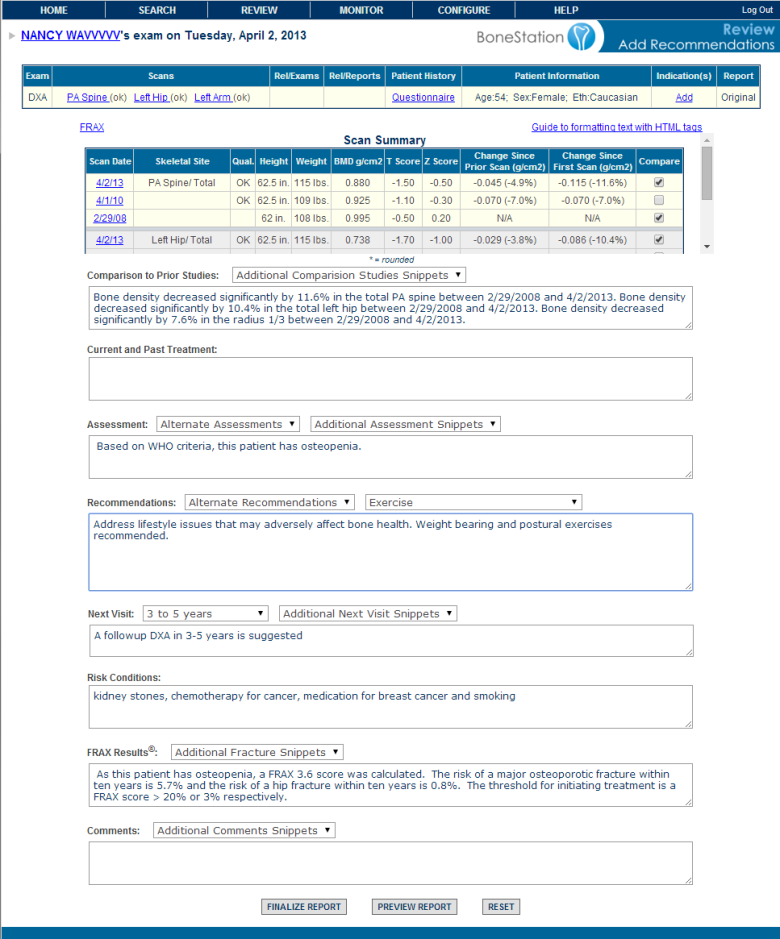 Report sections are filled in, some automatically. (click for full size)

The Summary screen can show a variety of optional report sections.  In the above example:

Note that there are drop down menus with many sections.  These contains macros of frequently used phrases that may be easily entered in to the report. The physician can also manually enter information into any section.

This was a brief overview of the review process.  Many features, such as the integration into EMR systems, were not described or were only touched upon to keep the article short. If you would like to learn more, feel free to contact us.  Of course we are happy to hear from you if you have specific topics you’d like covered in future articles. Thank you.

The Evolution of Bone Density Reporting

Introduction
In this article we’ll examine bone density reporting and how it has evolved over the years.  Bone density testing is a relatively new test.  Reimbursement for bone density tests wasn’t approved until the mid 1990s.  DXA machines became the primary method used to measure bone mineral density.   Initially, there was little to aid physicians who reviewed bone density scans, as the process was largely manual.  Now there is a cloud based solution.

We’ll take a brief trip, chronologically, through the advances in bone density reporting.   Improvements in reporting will be discussed.  Quality, convenience, and cost improvements will also be noted.

We break down the evolution of bone density reporting into three stages:

Radiologists often use another method to review bone density scans.  This involves the use of PACS with  dictation or transcription.  We’ll look at this option in more detail in a future article.

Background
A bone density scan is a somewhat unusual test.  It has the qualities of both an imaging procedure and lab test.  The scan consists of an image plus numerical data, such as bone mineral density (BMD), t-score, and z-score.

The process of evaluating bone density scans is referred to as reading, reviewing or interpreting bone density scans.  Physicians are specially trained to read bone densitys scans.  A reviewing physician typically looks at both the scan image and numerical data.  It is common to compare current scans with a patient’s prior scans.  A typical report  may include the numerical scan data, an assessment (for example, osteoporosis, osteopenia, or normal), recommendations, and a statement about change in bone mineral density (BMD) – assuming the patient had prior scans.

The Evolution
Manual Reporting
In the beginning, bone density reports were created manually.  DXA machines produce printouts of scans.  A printout contains a scan image and tables of numbers, including bone mineral density (BMD), t-score, and z-score.   The data was typically re-entered into a word processor and an assessment was typed in.  The scan image was usually omitted, since it was difficult to get the scan image into the report.

The disadvantages to this method are quite obvious:

This software was an advancement and addressed issues with the manual method:

The desktop software also represented an additional cost – both direct and hidden.  The main direct cost was the software itself.  The DXA manufacturers offered the software for purchase.  Hidden costs included addressing the problems described above.  Additional tools and infrastructure are need to backup electronic data, store reports on a network, organize reports (in a database) to be easily searchable, and provide security and privacy of electronic data.

Cloud
The “cloud” solution is BoneStation.  The term “cloud” is today’s common lingo for storing data out on the Internet.  Scans are transmitted, via DICOM, to BoneStation.  Reviewing physicians log into BoneStation’s web application and can view scans – images and data – and create reports.

BoneStation solves the problems of the manual and desktop methods.   Scan data (BMD, t-score, z-score, etc) is automatically extracted and made available on the report.  No data entry is needed.  BoneStation also makes prior scan images and reports available during the review process, which was a shortcoming of the desktop solutions.

New problems introduced by the desktop software are also addressed.

In addition, there are additional clinical advantages:

Cloud based solutions often solve a wider spectrum of problems while also being more cost effective.  BoneStation addresses issues of quality, security, data integrity, and privacy.  It is easy to install and use, requiring simply a web browser and internet access.

Reading bone density scans on a mobile device with BoneStation.